Erwin Wilde came home to Machaven last night. A house built in 1907-1908 for her grandmother, and James Hines, her grandfather, a leading businessman, civic leader. H.P.S. Keller was the architect for the 2 1/2-story, Classical Revival style brick dwelling with a slate-covered hipped roof. With five interior chimneys, a pedimented portico with Doric columns, and a full-width one-story porch, Machaven stands on a half-acre plot surrounded by a 1930’s Flemish-bond wall. Machaven is to be found at 306 S. Grace Street in the Villa Place Historic District. 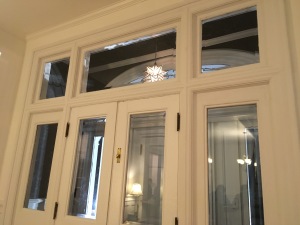 You’re familiar with a sleeping pet who suddenly raises his or her head because they hear something, know something. Machaven was sitting quietly last night in the twilight expecting members and the board of Preservation Rocky Mount. In through the door, came a familiar voice, a known footstep. It was a little girl, who claims to be 83 years old who stood smiling. The house was instantly happy. This happiness went beyond its on-going restoration, lights and workman bringing a new purpose to Machaven. This happiness was the recognition of Erwin Wilde, who’s mother had been left the house when Mr. Hines died, who then raised her young children in the house before it became the City Club and important add-ons took place like an elevator. 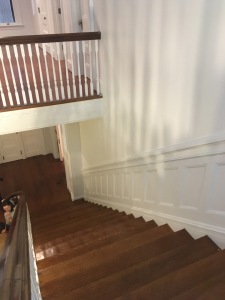 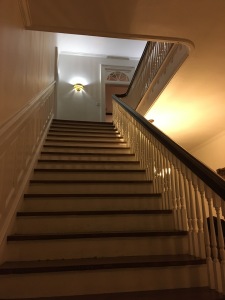 Erwin is a living testament to what I know is true: age is only a number, an attitude, and can be a cause for celebration. Bright and funny, Erwin shared stories that endeared her to everyone, long time friend or new. She spoke of the 33 step staircase and the wallpaper in the dining room, though painted over, whose roses continue to bloom. They are slightly visible in a certain light, but plain to see in Erwin where ever she is. 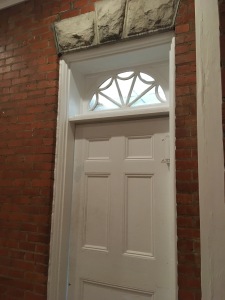 I have a big imagination, but it was a privilege to hear about the conversations that took place around the dining room table, the room where we were gathered. Machaven is woven through the story of so many. Weddings, receptions, parties, white table cloth dining, being shooed off the wall by the maids in the house, or trick or treating at Halloween, the magnificent home that remembers it all. Being in Erwin’s company last night, to see her smile and laugh, old friends gathered around her, made me cry, of course. CLICK HERE: Erwin is one of the ‘prisms of light’ I wrote about to begin 2019. I can’t think of a better way to begin 2020!  Scroll down to read comments.

Happy New Year To All

Announcing a new podcast launching on April 21, 2021.Talking Main Street will be five minute episodes. Enjoy Stepheny’s storytelling and learning to speak Main Street.
Shotgun homes in wards one through four are valuable assets to our housing needs. They need to be priorities in our revitalization plans. #SavingSignificantArchitecture
#bungalow #preservation #Rocky Mount NC
Another Main Street finalist, Collierville TN. Inspiration for Rocky Mount North Carolina.
Check out the blog, Main St.,rockymount.com for more on littering in Rocky Mount.
<span>%d</span> bloggers like this: