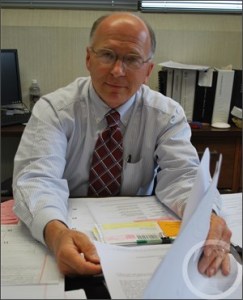 When I first met Peter Varney, the retired assistant city manager, I recall a pleasant man, dressed as neat as a pin, self-contained, with vivid blue eyes. Looking back, I’ve come to appreciate the saying, “Great oaks from little acorns grow.” We meet people all the time but in this instance, I made a friend, which has been a blessing.

Knowing everyone’s respect and admiration for Peter, I hope there is still room in the Peter Varney Fan Club. How lucky am I that it was Peter who first showed me the restored Train and Bus Station undertaken on his watch. The preservation and restoration of these two architectural gems now serve as anchor projects in the Rocky Mount revitalization puzzle.

Click here to read more about my visit to the bus station.

It was in the train station that an older woman said hello to ‘Mr. Peter.’ It was obvious that everyone knew him as he greeted them by name. Nodding my head in ‘Mr. Peters’ direction, I said to this lady, “Tell me about him.” Her eyes lite up and she smiled, “Oh, he’s the best!” A wonderful tribute I can not improve upon.

Peter spearheaded a number of key projects in his 41 years with the city. Not in order, there was the completion of the Helen P. Gay Rocky Mount Historic Train Station, Denton Street Pool, and the Douglas Block, the Senior Center, Sunset Park, Martin Luther King, Jr. Park, the Warehouse and Field Operations Complex and the acquisition and development of Battle Park. Peter’s first project after arriving in the city in 1971 was the Rocky Mount Judicial Center. One of his most difficult but advantageous projects for the city was the completion of the Rocky Mount Sports Complex. After its use as a municipal airport, the area was a crop dusting operation for years which caused environmental issues. Varney, city staff and the previous property owners undertook a major cleanup of the contamination. The result was a state-of-the-art Sports Complex which currently brings in over $10 million to the area. Peter also led the completion of the Imperial Centre for the Arts and Sciences, a flood recovery project and one of the largest public investment projects the city has ever undertaken. This doesn’t include the countless things he gave his heart and time to that have no name in capital letters left behind.

Peter Varney, a role model whose leadership style and moral compass in dealing with people throughout his life and career are exactly what is needed today. We respect and honor the Peter Varney years knowing the stories of countless people he helped, the neighborhoods where he made things better. This quiet, unassuming man, with great intelligence, proves it is not the political power bullied from others that is the prize. What prevails is the good you have done in this world that will cause people to say, “Oh, he (or she) is the best!”

Peter Varney has long been one of the crystal prisms that cast rainbows on Rocky Mount’s wall. He will continue to do so.  CLICK HERE: I don’t want you to miss the Pollyanna movie clip of hanging glass prisms I included in the last post. You will better understand why this imagery works for Peter and Rocky Mount.