Why would Mr. Lynell Bynum, (1924-2002) decide in the early 1970’s to buy up an entire block of buildings in downtown Rocky Mount NC? How is this connected to real estate investor and general contractor, Ben Braddock, and his business partner, who have purchased from Chambliss and Rabil Commercial Reality, Station Square, a 65,000 square foot facility.

We have before us men whose names are now allied: Lynell Bynum, the creator of Station Square and Ben Braddock, who like a long-distance runner in a relay race has already taken off down the track, the baton firmly in his grasp. He has turned towards the new possibilities of Station Square. I hope you will help line the sidewalks to cheer him on in his endeavors. 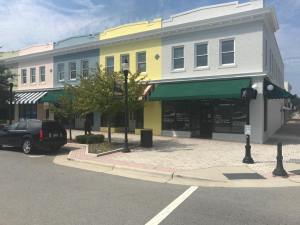 Go and see for yourself the new opportunities there are to shop, soon to eat, and where there is impressive space for your business. On the right: Station Square freshly painted. It’s fabulous. We will have the opportunity to talk further with Ben, but what about Mr. Bynum?

Knowing Mr. Bynum could have spent his considerable dollars on anything, why on a bunch of old buildings he restored and connected, giving them a new purpose in downtown Rocky Mount? I’m certain Mr. Bynum would be leading the charge for the revitalization of downtown Rocky Mount today. Ahead of his time, he believed in the preservation and the restoration of commercial architecture for new purposes.

To understand Mr. Bynum, we need a context in which to place him and we can find answers amongst The Greatest Generation at the end of WWII. Lynell belonged to the Army Air Corp and flew B24’s. He was 18 years old in 1942 having experienced the great depression. (1929-1941) This becomes significant to our story in remembering that there is a common theme for the great generation which was self-sacrifice.

They’d experienced the harsh economic realities of the depression, seen the worst there was to see during the war and came home having developed values of personal responsibility, duty, honor, and faith. Tom Brokaw writes that these characteristics helped them to defeat Hitler, build the American economy, give succeeding generations the opportunity to accumulate great economic wealth, political power, and the freedom from foreign oppression to make whatever choices they liked.

When we speak of Lynell Bynum, there is a litany of American values that explain why he would invest in a place called home that subsequently benefited from his leadership, values and his determination to make a contribution in Rocky Mount. Mr. Bynum reminds us of what we must not forget, which seem under threat…..words to live by….. personal responsibility, accountability, a strong work ethic, the ability to be self-sufficient/reliant, the capacity for loyalty, courage, honor, a sense of duty and unabashed patriotism along with a strong sense of gratitude, pride in accomplishments, all with quiet humility. We thank Mr. Bynum for reminding us of the under-pinning of his life and for his contributions.

Next time: Mr. Bynum’s partners with the City of Rocky Mount. 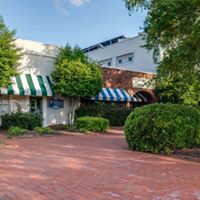