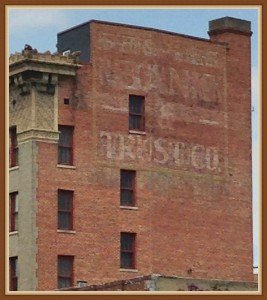 Our own Rocky Mount Ghost Sign on Peoples Bank

Ghost signs are the typically faded remains of advertising once painted by hand onto the brickwork of buildings. They can be found in cities, towns and villages across the world advertising many different products and services that have remained on buildings since the early 20th century. Rocky Mount, NC has a wonderful ghost sign pictured above. The faded remnants of another time have inspired blogs, walking tours, and a sort of treasure hunt looking for a ghost sign you have never noticed. Old painted advertisements are occasionally discovered upon demolition of later-built adjoining structures. Throughout rural areas, old barn advertisements continue to promote defunct brands and quaint roadside attractions. Many ghost signs from the 1890s to 1960s are still visible. Such signs were most commonly used in the decades before the Great Depression.

As signage advertising formats changed, less durable signs appeared in the later 20th century, and ghost signs from that era are less common. Ghost signs were originally painted with oil-based house paints. The paint that has survived the test of time most likely contains lead, which keeps it strongly adhered to the masonry surface. Ghost signs were often preserved through repainting the entire sign since the colors fade over time. When ownership changed, a new sign would be painted over the old one.

Conservators today are being asked to preserve the original signs rather than paint over them. New products for consolidation are available that structurally stabilize both the components of the paint and the masonry substrate. The website Preservation Science discusses research, pertinent to ghost signs. Here is the link for my Ghost Sign Board on Pinterest with more wonderful examples.

Help me find the ghost signs of Rocky Mount. Post location/ info in the REPLY section below. I’ll photograph and give you credit for your find.

Hope you will Join me for this newest five minute podcast.
I hope you will take five minutes tomorrow and listen to my podcast, talking main street with Stepheny. I mention a book that I read as a child that became applicable do you are at risk neighborhoods in Rocky Mount. I hope you will enjoy it.
New podcast
A Reminder of the new 5minute podcast 6/16/21. “Every brick wants to be something.”