“If you have eyes to see past the broken glass and boarded facades, if you look up as I do, you will see what I see. Commercial architecture holding the heartbeat and stories of Rocky Mount.” -Stepheny Houghtlin

This quote of mine is one approach to preservation. There are many avenues to pursue when considering what you are interested in.  PRM had a meeting this past Wednesday, Feb 13th, which I led. No preservation was done! It was more like giving a sales pitch (for Saving Main Street) to a group of enthusiastic salesmen hoping to ignite their excitement and have them want to sell my product. Wonderful people were there; the best and the brightest as a matter of fact.  We’ll talk more another time about connecting the dots from A– an interest to B – a plan to D- something gets done.

Wednesday night I was reminded of an AA story that says when someone gets up to give a talk at a meeting, they give three speeches…the one they prepared, the one they give, the one they revise on the way home. I was so busy with the sales pitch that there was no time to talk about the real matter at hand that not only effects Saving Main Street, but supports continued revitalization. This takes strong, honest city government that equates to good practices, a city government that does their job with competence and for the good of the taxpayers. There is no saving anything without that.

For the last three weeks, I have been involved with hundreds of others in what is called civic engagement. As hard as the Council has tried to deflect the issues at hand by bringing up extraneous topics, or pinning the public concerns on what was called a dark shadow, no one is having this kind of diversion anymore.  Whether at home or from a seat at City Hall, we are now focused on what is germane, expecting good governance and an end to the long list of what has gone wrong. The plan the Mayor spelled out last week is not good enough. It is more messing about with a myriad of issues that must be taken care of to the satisfaction of the community.

The flag that I have planted says we need leadership that will provide the will, enforce the ordinances we have on the books, stabilize the facades, put first things first before expecting me to celebrate a new motel that has obviously taken precedence over  Main Street – again. Why would we put another large project like this in the hands of the current Council and Management until complete order has been restored? Still, I believe we are closer to righting wrongs than before because of this groundswell of public engagement, and talk of new leadership running for seats on the Council. We need policies and procedures that safeguard us from any further graft and corruption and then Preservation will go forward. Plant your flag in the ground beside mine asking for a resolution so we can get on with getting on. 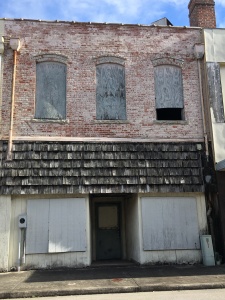 “You must learn how to extract things of value out of things that seem totally worthless.” Pastor Sunday

The Beauty of Preservation