The Great Music of the “Colored June German” – Part 3 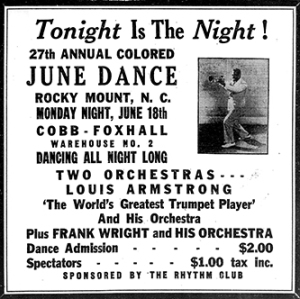 Shall we dance? For a small town, known for tobacco, cotton, and lumber mills, the dances began as a celebration of the tobacco crop that sustained the community and became the highlight of Eastern North Carolina’s social life. The popularity of the dances crossed over to Rocky Mount’s African-American population. In 1917, a second June German began, in those days sometimes referred to as “the colored June German.” It was held the Monday after the traditional dance on Friday night. The same warehouse and decorations were used. The black communities June German soon became an entity unto itself, growing larger than the original dances. This second event came to be a nationally renowned stage for many of the famous bands in the country. In the ad above you find Louis Armstrong as one of two bands that got the evening started, and then the big band would come on later and play all night.

At the peak of its draw, in 1949, the African American June German with Count Basie drew over 24,000 dancers and spectators. Click on Youtube Video for Count Basie & His Orchestra. Tickets were sold just to watch the festivities. Wouldn’t you love to have heard  Buddy Johnson and Roy Eldridge, popular in the big band era, and my favorite, Ella Fitzgerald or Billy Eckstein when they entertain at these famous affairs.

Elijah Gaddis, UNC, wrote an article in 2013 which I found while doing research. Gaddis states that in the beginning, the African American June German was probably not much more than an attempt by the community to replicate for themselves some of the fun the dances were providing. Soon the second dance developed its own traditions and moved away from the influence of the white community. Other African American communities in neighboring counties also had their own germans ever year. Little is known about them with scarce media coverage. It would be great if anyone could add to this historical info.

One day, as more pieces of the revitalization puzzle are in place, with time and energy, there will be a revival of June German dances. People will make room in their homes once again, to host our visitors. Good china and silver will adorn tables layered with ham and biscuit, other favorite Rocky Mount recipes provided by our great cooks. Ware houses will be decorated, music will fill the air. The one exception to the “no drinking” policy will allow and feature, our Rocky Mount micro beer world. Perhaps the black tux jackets can give way to white summer jackets, and the women’s dresses will still be beautiful.

We’ll all work together to make it a great come back. Can’t wait. 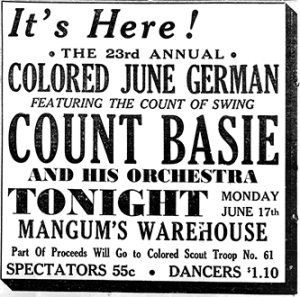 Stepheny Forgue Houghtlin grew up in Evanston, IL. and is a graduate of the University of Kentucky. She is an author of two novels: The Greening of a Heart and Facing East. She lives, writes and gardens in NC. Visit her: Stephenyhoughtlin.com
View all posts by Stepheny Forgue Houghtlin →
This entry was posted in June German Dances in Rocky Mount and tagged African American June German in Rocky Mount NC, Elijah Gaddis, UNC article. Bookmark the permalink.