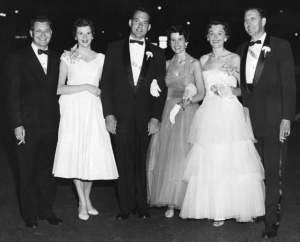 An elegant affair….from 1903 into the 1920’s a midnight supper was served in the tobacco warehouse were long tables were covered in satiny damask and adorned with crystal and silver. Mrs. F. S. Spruill described the banquets at the early balls. “All the ladies took their best silver, china, and linen for the midnight suppers which were served. They worked for days getting together the old hams, the chicken for salad, the freezers for the pies and the array of cakes. No one thought of leaving the warehouse because the refreshments were served with appointments and decoration of the very best.”

J.P.Bunn, local lawyer, became the unofficial historian of the dances, although I can make a case for the scrapbook on loan to me created by Marian Stinson Herring, (Mrs. George T. Herring, Jr.) as a great record of the June German through the years. The black & white photo above is part of Marian Herring’s historic record. Bunn’s authority began when he attended his first German in 1890 as a young boy. According to him, the dances were held in the fall in connection with an 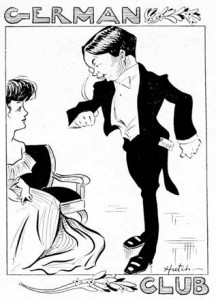 agricultural fair. This was later changed to an early June date so the college students could attend. You will be amused that the economy-minded members of the organizing club found that a band could be secured at a cheaper price in June. Every male dancer admitted to the floor was dressed in black evening clothes. No exceptions. Even a movment to wear white dinner jackets in June was voted down. “Traditionally black evening clothes have always been worn to the June German.”  This image on right is from the 1906 Yackety Yack UNC Yearbook.

Countless intermission parties were given throughout the long night of dancing that ended at 5:00 in the morning. Residents threw open their homes to the many visitors. Though wild tales about drinking were told, J. P. Bunn insisted that they were exaggerated stories by folks who did not attend the dance. Twenty marshals had charge of the conduct on the floor, and no drinking was allowed. If a person drank elsewhere and managed to get on the floor, they were asked to leave. Here is one of the badges the Marshals wore found in Marian Herring history scrapbook. Were you ever a Marshal? 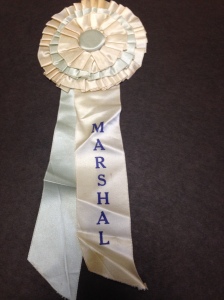