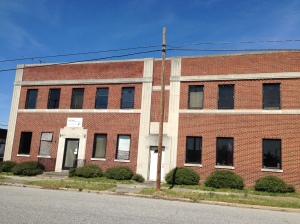 Some of you can tick off the names of the hospitals that have been a part of the medical story in Rocky Mount. They are  The Atlantic Coast Line Hospital, Rocky Mount Sanitarium (1913), Park View with its 1st patient in 1914, Memorial in 1937 and finally, Nash General. Each deserve their own story. We will begin with Memorial Hospital, pictured above, because it presented itself to me as the result of “driving around.” My writing friend, Linda Edwards, a treasure trove of Rocky Mount history, upon request, drove me through the Historic Edgemont District, where I continue to return. Linda offered a running commentary about the homes and one time residents she’d known while growing up in the neighborhood. We drove past Memorial Hospital on Rose street and stopped so I could take photographs. This led to walking around, admiring the architecture, finding ghost signs, talking to the two great guys that own the barbershop on the corner. Linda, admitted she’d never paid much attention to the wonderful buildings in the area, some of which are boarded up, but retain their dignity and architectural significance. These buildings remind me of a young girl in her bikini on the beach waiting to be discovered. Once introduced to Memorial, I began another research merry chase.

“Nothing but the facts, ma’am.” That’s no fun, boring, in fact. Let me set the stage, create a setting for our next Main Street Rocky Mount series of posts. One of the leading men, with a star on his backstage door, is Dr.Marvin Lee Stone, who built a clinic that ultimately became Memorial Hospital. The purpose, to facilitate the practice of Dr. Stone and Dr. J.A. Speight and Dr. J.P. Bunn, who joined the staffing in 1938.  Our scene is set in the 1940’s. Three Rocky Mount doctors are hard at work practicing medicine. Their costume, wide

-lapelled suits with wide patterned neckties that had become fashionable.

I hope one of the doctors had a car like this gorgeous 1947 Buick Convertible. Climb in and join me tomorrow for Part 2