“History is the essence of innumerable biographies.” 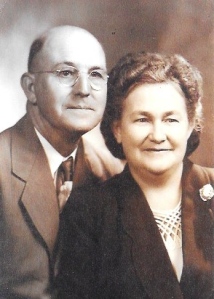 An excerpt from the letter Mr. Hyman Battle wrote to Milton West on the occasion of his retirement from The Rocky Mount Mills

…He doesn’t recall the names of all the mills he worked in between 1910 and 1916, but he worked in Charlotte, Raleigh, and Fayetteville before coming to Rocky Mount in 1916. This came about when his sister wrote and told him our mill needed experienced help. He says he had no trouble in getting a job – he even recalls his first day at work when he ran 4 “old timey” drawing frames which had no guards. Mr. West says only good sense kept you from getting hurt. Mr. West doesn’t remember getting hurt.

…On April 7, 1917 he married Miss Cora Register who had come to Rocky Mount from Duplin County to work in the mill.

…”Mr West, Rocky Mount Mills considers it an honor to have had you with us for 35 years. So with a great deal of pride, I present Milton Dupree West for his 35 year Special Award.     Hyman Battle

Stepheny with a note: This is the first in what I hope will be a series of stories about families who lived in the Mill Village. If you have a story you are willing to share, PLEASE, leave me a comment below and I will contact you. Let’s honor the past together.