“Until you get the drugs out of here.”  That’s what I was told Saturday afternoon standing on Gay Street while talking with two older women that were out for a short walk. I was taking photographs in the 800-900 block on Gay between Tillery, Vyne, and Pine. I  parked my car and walked towards these old friends, one who’d lived in the neighborhood since the 70s. “It was nice back then, a good place until drugs came here.” She gestured with her hand towards several houses we were standing near to indicate their condition. Restored housing builds safe neighborhoods, fosters pride and homeownership, is an economic win, is vital for the community that is cultivating revitalization.

The little woman who did most of the talking told me she was paying $400.00 a month rent. “I’m not gonna pay that ‘sorry-ass’ man no more. I’m leaving.” The expression on her friend’s face told me this wasn’t the first time she’d heard this declaration.” I don’t use the ‘sorry ass’ expression myself but 15 minutes later I had taken quite a shine to it. If I wrote lyrics for songs instead of this blog, I would definitely use the phrase in a James Brown-like song, singing about these houses that have stood guard all these years over good people and are feeling the effects of old age and neglect, going down! going down!

When I asked who their councilman was, they didn’t know. You and I know these houses didn’t get like this since yesterday but over a long time of neglect. As far as I’m concerned, the blame is knocking on the Ward’s Councilman’s door who has influenced nada, nothing. How could they not have championed these people they supposedly care for and not be the driving force to use their position to stay the course with the police to clear the drug dealers out and keep them out! so investment will continue and these wonderful neighborhoods can be saved. Thank goodness for these angels in disguise that see the worth of these houses and are doing something about it. I was told that some of the residents on the street are working on their own homes. Look at these photographs with eyes to see how perfect they are for what we need. The women told me how nice some of the houses are inside. I imagine that’s in comparison to a less demanding standard than mine.

When we finished talking, the women told me, “You get on home before dark.” Several cautions to “Be careful!” I was leaving but they were staying. I drove away with, “Ain’t nothin’ gonna change until we get the drugs out of here,” ringing in my ears. I don’t know where the police station is that the Chief of Police resides. Having to stay at home, I can find a phone number, however, to plea my case after I figure out what to say. I’d rather walk through this area leading him by hand to see again with new eyes what it once was and has become and can be again. I learned a lot in those fifteen minutes. It upset me but still, I’m grateful. I blew them both a kiss and drove away. Though I’d said my name and that I write a blog, you know these two older ladies are still shaking their heads, “who in the hell was she?” 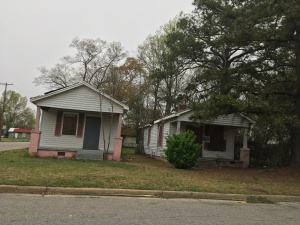