“Preservation does not mean merely the setting aside of thousands of buildings as museum pieces. It means retaining the culturally valuable structures as useful objects: A home in which human beings live, a building in the service of some commercial or community purpose. Such preservation ensures structural integrity, relates the preserved object to the life of the people around it, and not least, it makes preservation a source of positive financial gain rather than another expense.”
Lady Bird Johnson

In Rocky Mount, NC. we’ve already lost properties that we can’t get back. Without an honest inventory of what is lived in, stands empty, is worth rescuing, can’t be saved, what is owned, rented, cared for or neglected, we’re at six and sevens in safeguarding what we’ve got. For example, do you know anything about a Lustron home? I had to do some reading, but I’m writing this post about these homes to illustrate that this is the kind of information we learn with an inventory of our historic architecture.

In January 1947, the newly formed Lustron Corporation announced that it had received a $12.5-million Reconstruction Finance Corporation loan to manufacture mass-produced prefabricated homes that featured enamel-coated steel panels. The Lustron was an all-steel house, with walls made of 2×2 20-gauge metal panels, with a porcelain enamel finish. The roof was porcelain enamel steel, and unlike traditional roofing shingles, with a lifespan of at least 60 years. Entrepreneur, Carl Strandlunds, designed these houses to help deal with the severe housing shortage after World War II. About 2,500 Lustrons were built. We have two Lustrons in Rocky Mount!

I have included two photographs of one of those houses on Sunset Ave, once in bad shape. I took a few new pictures to prove that the Sunset Street house is obviously being taken care of now. (Our second Lustron is on Eastern Ave, corner of Pineview Cemetery. I haven’t gone to see it yet.)

A small group of Lustron owners became advocates for preserving the original condition of these homes. About 2,000 Lustron homes are still in existence in 36 states. Many have been modified with additions, remodeled kitchens, vinyl windows, composite roofs, new heating systems, sheetrock interior walls, painted exteriors, and siding. Some have been dismantled, relocated and reassembled. CLICK HERE FOR PART ONE IN SERIES 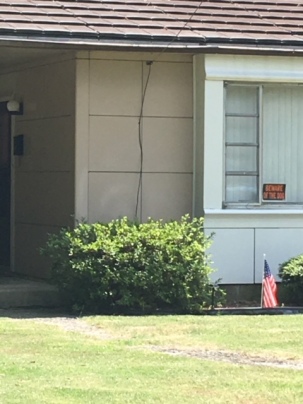 Quantico, Virginia had the largest collection of Lustrons in the country, but those 60 houses are now gone. Some were moved, most were demolished.

Rocky Mount needs to keep in mind that what is gained may be viewed temporarily as an improvement, but what is lost is lost forever. These posts are not to suggest that progress is a bad thing, only that as the revitalization process continues, we must protect our valuable architecture and the stories they hold. We NEED a current inventory!

Let’s look at one way to accomplish an inventory in Part 3 of this series.

3 thoughts on ““Don’t it always seem to go -That you don’t know what you’ve got till it’s gone: They paved paradise and put up a parking lot.” – from “Big Yellow Taxi.”- Part 2”