Posted on May 13, 2020 by Stepheny Forgue Houghtlin

“Architecture has its own realm. It has a special physical relationship with life… a sensitive container for the rhythm of footsteps on the floor, for the concentration of work, for the silence of sleep.”
Peter Zumthor, Thinking Architecture 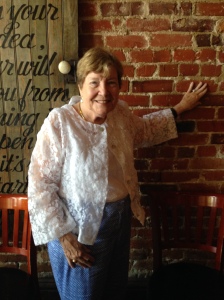 I think of the rustic charm of exposed brickwork in buildings as art. The colors and textures of exposed masonry add a unique character to any structure. If you have not had the pleasure of placing your hand on a brick wall, next time one calls to you, do it!  A quick story about touching: My youngest son by misdeed was asked to stay home from school a day. It was an opportunity to take him downtown to the Chicago Art Institute where the famous lion sculptures stand guard. He wanted to touch whatever he looked at. (He comes by that rightly, I’m a toucher.) More than once the museum guide in a gallery cleared his throat as a warning, don’t touch. What was to be a day of punishment was far better spent on Michigan Avenue in the midst of glorious architecture. All these years later, I touch brick walls, and that grown son has a son of his own who both touch my heart.

I can never resist telling a story, but some information too. A brick is building material used to make walls, pavements, and other elements in masonry construction. Traditionally, the term brick referred to a unit composed of clay, but it is now used to denote rectangular units made of clay-bearing soil, sand, and lime, or concrete materials. Bricks can be joined together using mortar, adhesives, or by interlocking them. Bricks are produced in numerous classes, types, materials, and sizes which vary with region and time period, and are produced in bulk quantities. Two basic categories of bricks are fired and non-fired bricks.

A lovely brick arch left intact in an ‘above the store’ flat in New Bern.

Bricks were made by hand until about 1885. Once the Industrial Revolution broke out, the brickmaking machinery was introduced. Consequently, the number of clays that could be made into brick was greatly increased which influenced the production capacity. Handmade brick production ranged up to 36,000 bricks per week but by 1925 a brickmaking machine made 12,000 bricks a day

A great example of leaving exposed brick in a restoration. Imperial Center.

The interior brick at the Imperial Center restoration. Looking beyond to more beautiful brick walls.

The exterior brick at the restored Rocky Mount Bus Stations 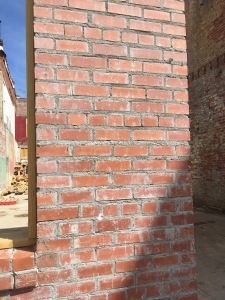 Going up now: Approved brick for rebuilding the back of two Howard Street buildings.

The restoration of a Howard Street building using beautiful brick.

Exposed brick is a piece of art to behold.

Exposed brick with a crack running through is like a self-portrait on any given day. 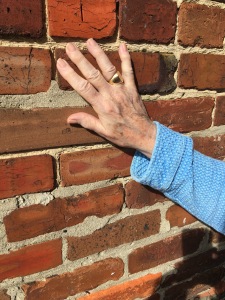 We use our hands for a loving touch, a moment of comfort, in prayer. Why not touch a brick wall in honor of the workman, the results, the enduring quality of what still stands. A silly thing I know, until you remember when someone has taken your hand in comfort or in love. Let us place our hands on this old brick in appreciation for its past and  new future.

Stepheny Forgue Houghtlin grew up in Evanston, IL. and is a graduate of the University of Kentucky. She is an author of two novels: The Greening of a Heart and Facing East. She lives, writes and gardens in NC. Visit her: Stephenyhoughtlin.com
View all posts by Stepheny Forgue Houghtlin →
This entry was posted in Preservation Rocky Mount and tagged Preservation, The beauty of brick, The brick in Rocky Mount's train and bus station. Bookmark the permalink.