Giving This Entrepreneur Our Utmost Consideration

Meet Zebulon Benjamin Bulluck, born April 9, 1884 – April 6, 1981 – Proprietor and Operator of the leading Meat Market of Rocky Mount. The summer of 1905  Z.B. as he was called, entered the meat market business.  With considerable business acumen, treating all his customers with the ‘utmost consideration,’ and offering the best and freshest meat available, it was a business plan that brought him considerable success. At an early age of twenty-seven, his extensive real estate holdings would have reached twenty thousand dollars. Among other things, he became a valued and influential stockholder in the First National Bank of Rocky Mount, the only bank in the city at that time.

Z.B. Bulluck developed the Englewood Subdivision on the western outskirts of the city, a 10-minute drive from Main Street. Driving on Sunset today it is hard to imagine how the undeveloped area might have looked when in 1927 the Bulluck House was built occupying an entire block that represents Englewood’s  early spaciousness and was the development’s premier resident. 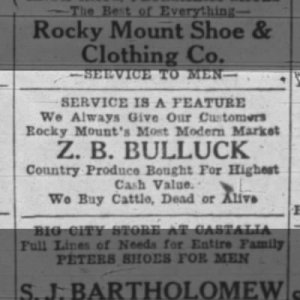 PS: A personal note – I have missed seeing you on Main Street having taken time out after the brief illness and death of my sweet boy, Bob Houghtlin. After a terrible cold, I have my energy back and have headed out the door to begin research and writing again. I appreciate your prayers and concern more than I can say.  THANK YOU!   I wanted to get back in the swing of things by writing about Z.B. Bulluck, an early Rocky Mount entrepreneur because Rocky Mount is all about entrepreneurship these days. We need men and women like Z.B. who work hard, treat people well, offer only the best. Mr. Bulluck had a vision for the community, offered his leadership and expertise, helped build a future. That’s exactly what we need in our entrepreneurs today, those who are already here and all those who are on their way.